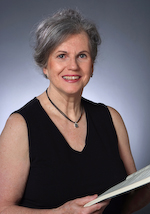 Dr. Frances Gray, pianist, taught in the areas of Piano Performance, Piano Literature & Pedagogy, Collaborative Piano, and Music Theory. She received her Associate Diploma and Bachelor of Music Degree from McGill University and her Master and Doctor of Music Degrees from Indiana University, where she was a student of Menahem Pressler, renowned teacher and pianist of the Beaux Arts Trio.

Dr. Gray is the recipient of many awards and research grants, including a Silver Medal from McGill University, Canada Council Fellowships, and a Commonwealth Scholarship for a year's study at the Royal Academy of Music in London, England. In 1998, she received a UPEI award for Outstanding Scholarly Achievement.

Dr. Gray concertizes extensively as chamber musician as well as soloist, and is heard on regional and national CBC and Radio-Canada broadcasts. She has collaborated with many soloists and chamber groups, specializing in ensemble playing with string instruments. She has performed throughout Canada, in the United States, at Canadian Embassies in London, England, and Brussels, Belgium, in Rachmaninoff Hall of the Moscow Conservatory in Russia, and at the University of Melbourne, Australia.

At the Banff Centre for the Arts, Dr. Gray has recorded three solo piano CDs, all of which were nominated for East Coast Music Awards in the Classical category. The first CD, Poems for Piano, features solo piano music of Ernest Bloch, Frank Bridge, Edward MacDowell, Cyril Scott, and Alexander Scriabin. Her second CD, The Evocative Piano, features British, Canadian and American composers writing in an impressionist style in the early decades of the twentieth century. The third CD, Soundscapes of Spain, includes piano works by Isaac Albéniz, Manuel de Falla, Enrique Granados, and Joaquín Turina. She has performed a number of times with orchestra, most recently as guest soloist with the Prince Edward Island Symphony Orchestra in the Gershwin Piano Concerto in F. She has also appeared in many concerts at the Indian River Festival. Additionally, Dr. Gray is frequently invited to adjudicate Provincial and regional music festivals and competitions in the Atlantic area.