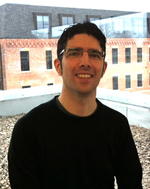 J. Marc MacDonald, Adjunct Professor in the Department of History and Classics at UPEI, specializes in the global circulation of Enlightenment science, technology, and medicine. He teaches courses on the history of European science and technology, the environment, crime and punishment and classical mythology. The most recent example of Dr. MacDonald’s scholarship is an article in The Island Magazine (no. 84 Winter/Fall 2019). It examines the international attention focused on Prince Edward Island, around 1800, as war and worsening climate in Europe expanded interest in utopias and new colonies, including Lord Selkirk’s PEI settlement. MacDonald is also a board member of the Glenaladale Heritage Trust, helping to expand public knowledge of a historic site. The volunteer organization formed to preserve the 529-acre Glenaladale Estate, purchased in 2018. It was home to early Highland Scottish settlers on the island, in 1772, as well as the location of a modernistic brick mansion, which philanthropist and tobacco mogul Sir William C. MacDonald had constructed in 1883-84.


MacDonald’s research—examining cosmopolitan and liminal science spanning the Enlightenment and early Industrial Revolution—focuses on the British-Franco-Swiss network and the Delessert family of Paris. His current project focuses on late eighteenth and early nineteenth-century transoceanic exchanges of science and technology. In his recent article, in Social Sciences (2017), MacDonald explores the role that Franco-Swiss savant-fabricants played in popularizing Thomas Malthus’ ideas and connections among political economy, botany, early modern climate shifts, and Darwinian science.

Malthus and the philanthropists, 1764–1859: The cultural circulation of political economy, botany, and natural knowledge

[Review of the book Jacobitism, Enlightenment and Empire, 1680-1820, edited by Allan I. Macinnes and Douglas J. Hamilton]

H-Net Reviews in the Humanities and Social Sciences, 2016

[Review of the book The Enlightened Physician: Achille-Cléophas Flaubert, 1784–1846, by Geoffrey Wall]