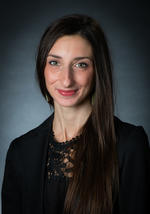 Flautist Morgan Saulnier has been a sessional instructor in the UPEI Department of Music since 2009. Her performances bring passion, immense expression, and an ability to evoke emotional engagement from her audiences. Her pedagogy focuses on getting the music off of the page, by encouraging and guiding her students in both the technical proficiency and the musical interpretation of the repertoire.

Morgan Saulnier holds a Master of Music in Flute Performance from Memorial University, and a Bachelor of Music from the University of Prince Edward Island. She has performed in several master classes and competitions across the country, receiving instruction from Michel Debost, Susan Hoeppner, Camille Churchfield, and others.

Ms. Saulnier plays Principal Flute with the PEI Symphony Orchestra, and is a core member of eklektikos - a chamber ensemble focused on new Canadian works. She maintains an active role in the music scene on Prince Edward Island - in high demand as a flute and piano educator, soloist, and collaborator. In 2014, she released a CD of French Flute Music with pianist Mark Ramsay.